How many times have you heard, “Third time’s a charm?”If that is true, then what is the fifth time? The sixth time?

In an October 3, 2016, advisory report, the Office of Inspector General (OIG) recommends that the Center for Medicare and Medicaid Services (CMS) heighten its scrutiny on personal care services (PCS) in states across the country. The OIG claims “that home health has long been recognized as a program area vulnerable to fraud, waste, and abuse.” Past OIG reports have focused on Medicare. This new one focuses on Medicaid.

OIG is a division of the U.S. Department of Health and Human Services (HHS) and is charged with identifying and combating waste, fraud, and abuse in the HHS’s more than 300 programs. But, evidently, OIG is not happy, happy, happy, when HHS disregards its findings, which appears to be what has happened for a number of years.

PCS are nonmedical services for people who need assistance with activities of daily living (ADLs), such as bathing, eating, and toileting. Most of the time, PCS are allowing the person to remain in his or her home, instead of being institutionalized. However, according to OIG, PCS is fraught with fraud.

PCS is an optional service for Medicaid, i.e., states can choose to cover the cost of PCS with government funds. But, on the federal level, PCS is provided, if medically necessary, in all states.

The OIG report summarizes Medicaid fraud schemes from November 2012 through August 2016. OIG goes on to say that the fraud in this report is merely replicate of Medicare fraud found in a prior reports. In other words,OIG is basically saying that it has found Medicare fraud in home health in multiple, past reports and that CMS has not followed through appropriately. In fact, this report makes over five times, in recent years, that OIG has instructed CMS to increase its regulatory oversight of Medicare/caid personal care services. How many times does it take for your spouse to ask you to take out the trash until you take out the trash? Third time’s a charm??

Mark my words…in the near future, there will be heightened investigations and increased audits on home health.

Here are some scenarios that can trigger an audit of home health:

While the above-mentioned scenarios do not prove the existence of Medicare/caid fraud, they are red flags that will wave their presence before health care investigators’ faces.

Here are the states (and cities) which will be targets: 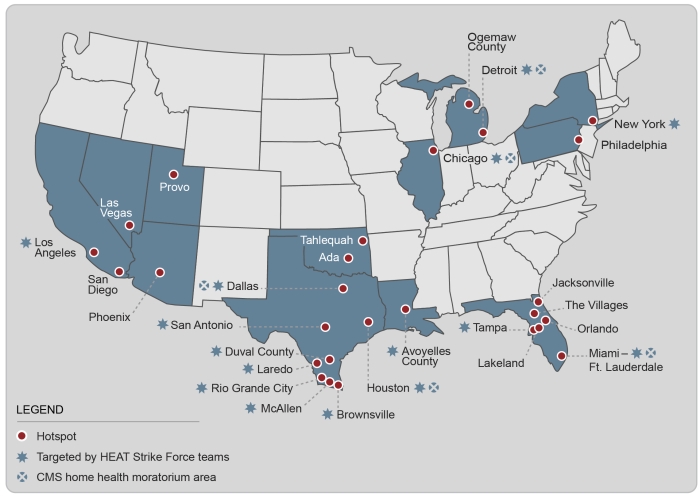 Notice that North Carolina is not highlighted. Notice that Florida is highlighted and contained numerous “hotspots.” Certainly that has nothing to do with the abnormal number of people on Medicare…

Regardless, North Carolina will get its share of Medicare PCS audits. Especially, considering that we have the 7th most number of Medicare beneficiaries in the country – that should have gotten us highlighted per se.

Since the OIG Portfolio report issued in 2012, OIG has opened more than 200 investigations involving fraud and patient harm and neglect in the PCS program across the country. “Given the significant vulnerabilities in the PCS program, including a lack of internal controls, and that PCS fraud continues to be a persistent problem, OIG anticipates that its enforcement efforts will continue to involve PCS cases.”Report.