Disclosure: This is the opinion/facts from the Kaiser Family Foundation, not me. But I found this interesting. My opinion will be forthcoming.

Medicaid covers about 73 million people nationwide.  Jointly financed by the federal and state governments, states have substantial flexibility to administer the program under existing law.  Medicaid provides health insurance for low-income children and adults, financing for the safety net, and is the largest payer for long-term care services in the community and nursing homes for seniors and people with disabilities.  President-elect Trump supports repeal and replacement of the Affordable Care Act (ACA) and a Medicaid block grant. The GOP plan would allow states to choose between block grant and a per capita cap financing for Medicaid. The new Administration could also make changes to Medicaid without new legislation.

1. HOW WOULD ACA REPEAL AFFECT MEDICAID?

A repeal of the ACA’s coverage expansion provisions would remove the new eligibility pathway created for adults, increase the number of uninsured and reduce the amount of federal Medicaid funds available to states. The Supreme Court’s 2012 ruling on the ACA effectively made the Medicaid expansion optional for states. As of November 2016, 32 states (including the District of Columbia) are implementing the expansion.  The full implications of repeal will depend on whether the ACA is repealed in whole or in part, whether there is an alternative to the ACA put in place and what other simultaneous changes to Medicaid occur. However, examining the effects of the ACA on Medicaid provide insight into what might be at stake under a repeal.

What happened to coverage? The ACA expanded Medicaid eligibility to nearly all non-elderly adults with income at or below 138% of the federal poverty level (FPL) – about $16,396 per year for an individual in 2016. Since summer of 2013, just before implementation of the ACA expansions, through August 2016 about 16 million people have been added to Medicaid and the Children’s Health Insurance Program.  While not all of this increase is due to those made newly eligible under the ACA, expansion states account for a much greater share of growth. States that expanded Medicaid have had large gains in coverage, although ACA related enrollment has tapered.  From 2013 to 2016 the rate of uninsured non-elderly adults fell by 9.2% in expansion states compared to 6% in non-expansion states.

What happened to financing? The law provided for 100% federal funding of the expansion through 2016, declining gradually to 90% in 2020 and beyond. Expansion states have experienced large increases in federal dollars for Medicaid and have claimed $79 billion in federal dollars for the new expansion group from January 2014 through June 2015.  Studies also show that states expanding Medicaid under the ACA have realized net fiscal gains despite Medicaid enrollment growth initially exceeding projections in many states.

What other Medicaid provisions were in the ACA? The ACA required states to implement major transformations to modernize and streamline eligibility and enrollment processes and systems.  The ACA also included an array of new opportunities related to delivery system reforms for complex populations, those dually eligible for Medicare and Medicaid and new options to expand community-based long-term care services.

2. WHAT WOULD CHANGES IN THE FINANCING STRUCTURE MEAN FOR MEDICAID?

A Medicaid block grant or per capita cap policy would fundamentally change the current structure of the program. These policies are typically designed to reduce federal spending and fix rates of growth to make federal spending more predictable, but could eliminate the guarantee of coverage for all who are eligible and the guarantee to states for matching funds.  States would gain additional flexibility to administer their programs but reduced federal funding could shift costs and risk to beneficiaries, states, and providers.

How would it work? Block grants or per capita caps could be structured in multiple ways. Key policy decisions would determine levels of federal financing as well as federal and state requirements around eligibility, benefits, state matching requirements, and beneficiary protections. Previous block grant proposals have determined a base year financing amount for each state and then specified a fixed rate of growth for federal spending. Under a Medicaid per capita cap, the federal government would set a limit on how much to reimburse states per enrollee.  Payments to states would be based on per enrollee spending multiplied by enrollees. Spending under per capita cap proposals fluctuate based on changes in enrollment, but would not account for changes in the costs per enrollee beyond the growth limit.  To achieve federal savings, the per capita growth amounts would be set below the projected rates of growth under current law.

What are the key policy questions? Key questions in designing these proposals include: what new flexibility would be granted to states, what federal requirements would remain in place, what requirements would be in place for state matching funds, what is the base year and growth rates, and how would a potential repeal of the ACA work with a block grant proposal?  Given the lack of recent administrative data, setting a base year could be challenging.  These financing designs could lock in historic spending patterns and variation in Medicaid spending across states, resulting in states deemed “winners” or “losers.”

What are the implications? Capping and reducing federal financing for Medicaid could have implications for beneficiaries, states, and providers including: declines in Medicaid coverage or new financial barriers to care; limited funding for children (the majority of Medicaid enrollees) as well as the elderly and those with disabilities (populations that represent the majority of Medicaid spending); reduced funding for nursing homes and community-based long-term care (Medicaid is the largest payer of these services); reductions in federal revenues to states and Medicaid revenues for safety-net providers.  A block grant would not adjust to increased coverage needs during a recession.  Block grants or per capita caps would not adjust to changes in health care or drug costs or emergencies.  Recently Medicaid costs have increased due to high cost specialty drugs and Medicaid has been used to help combat the growing opioid crisis.

3. HOW COULD MEDICAID BE CHANGED THROUGH ADMINISTRATIVE ACTIONS?

The Administration could make changes to Medicaid without changes in legislation.

How can changes be made through waivers? Throughout the history of the Medicaid program, Section 1115 waivers have provided states an avenue to test and implement demonstrations that, in the view of the Health and Human Services Secretary, advance program objectives but do not meet federal program rules. Longstanding federal policy has required waivers to be budget neutral for the federal government.

What kind of waivers may be considered?  Seven states are using waivers to implement the ACA Medicaid expansion, including Indiana.  The Indiana waiver, implemented under then Governor Pence, includes provisions to impose: premiums on most Medicaid beneficiaries; a coverage lock-out period for individuals with incomes above the poverty level who fail to pay premiums; health savings accounts; and healthy behavior incentives.  The Obama administration has not approved waivers that would require work as a condition of Medicaid eligibility.  It also has denied Ohio’s waiver request to impose premiums regardless of income and exclude individuals from coverage until all arrears are paid on the basis that this would restrict or undermine coverage from existing levels.  Many other states are using waivers to implement payment and delivery system reforms.  The incoming administration could decide whether or not to renew existing waivers and can approve a new set of waivers to promote its own program goals.

Last Thursday, I was interviewed by a reporter from New Mexico regarding our Teambuilders win, in which an administrative judge has found that Teambuilders owes only $896 for billing errors. Here is a copy of an article published in the Santa Fe New Mexican, written by Justin Horwath:

The true tragedy is that these companies, including Teambuilders, should not have been put out of business based on false allegations of fraud. Not only was Teambuilders cleared of fraud, but, even the ALJ agreed with us that Teambuilders does not owe $12 million – but a small, nominal amount ($896.35). Instead of having the opportunity to pay the $896.35 and without due process of law, Teambuilders was destroyed – because of allegations.

Another Win! 12 Million Dollar Recoupment Reduced to $896 – But There is a Twist

In this case, the Human Services Department (HSD) in New Mexico had reviewed 150 random claims. Initially, HSD claimed that 41 claims out of 150 were noncompliant. 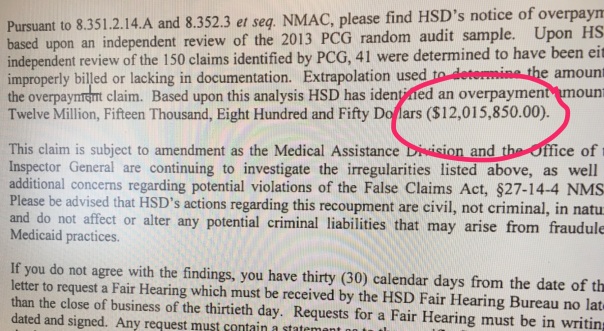 But, prior to the hearing, we saved over $10 million by pointing out HSD’s errors and/or by providing additional documentation.

You see, in New Mexico, the administrative law judges (ALJs) cannot render decisions. Look in the above picture. You see where it reads, “Recommendation?” That is because the ALJs in New Mexico can only render recommendations.

Because Medicaid has a “single state agency” rule; i.e., that only one agency may render discretionary decisions regarding Medicaid, and HSD is the single state agency in New Mexico charged with managing Medicaid, only HSD may render a discretionary decision. So in NM, the ALJ makes a recommendation and then the Secretary of HSD has the choice to either accept or reject the decision.

Guess whether HSD accepted or rejected the ALJ’s recommendation?

Now we will have to appeal the Agency’s Decision to overturn the ALJ recommendation.

Here, in NC, we obtained a waiver from the Centers of Medicare and Medicaid Services (CMS) to allow our ALJs to render Decisions. See blog.

I still consider this a win.