The Doctrine of Exhaustion of Administrative Remedies and Medicare/caid Providers

What is the doctrine of exhaustion of administrative remedies?  And why is it important?

If you are a Medicaid or Medicare provider (which, most likely, you are if you are reading this blog), then knowing your administrative remedies is vital.  Specifically, you need to know your administrative remedies if you receive an “adverse determination” by the “Department.”  I have placed “adverse determination” and the “Department” in quotation marks because these are defined terms in the North Carolina statutes and federal regulations.

What are administrative remedies? If you have been damaged by a decision by a state agency then you have rights to recoup for the damages.

However, just like in the game of Chess, there are rules…procedures to follow…you cannot bring your castle out until the pawn in front of it has moved.

Similarly, you cannot jump to NC Supreme Court without beginning at the lowest court.

What is an adverse determination?

In Medicaid, NCGS 108C-2 defines “Adverse determination” as “a final decision by the Department to deny, terminate, suspend, reduce, or recoup a Medicaid payment or to deny, terminate, or suspend a provider’s or applicant’s participation in the Medical Assistance Program.”

In Medicare, sometimes the phrase “final adverse action” applies.  But, basically an adverse determination in Medicaid and Medicare is a decision by [whatever entity] that adversely affects you, your Medicare/caid contract or reimbursements.

What is the definition of the Department?

NCGS 108C-2 defines the “Department,” as “The North Carolina Department of Health and Human Services, its legally authorized agents, contractors, or vendors who acting within the scope of their authorized activities, assess, authorize, manage, review, audit, monitor, or provide services pursuant to Title XIX or XXI of the Social Security Act, the North Carolina State Plan of Medical Assistance, the North Carolina State Plan of the Health Insurance Program for Children, or any waivers of the federal Medicaid Act granted by the United States Department of Health and Human Services.”

On the federal level, the Department would be the Centers for Medicare and Medicaid (CMS) and its agents, contractors and/or vendors.

For example, PCG tells a dentist that he/she owes $500,000 in overpayments to the State.  The notice of overpayment is an adverse determination by the Department as defined in the general statutes.

Move your pawn before moving your castle.

Typically, if a party has not exhausted its administrative remedies, the party cannot bring a claim before the courts.  However, NC courts have recognized two exceptions that I will explain in a moment.

If you bring a lawsuit based on the adverse determination by the Department, do you go to state Superior Court?  No.

In North Carolina, we are lucky to have the Office of Administrative Hearings (OAH).  OAH is fantastic because the judges at OAH, Administrative Law Judges (ALJs) have immense Medicaid experience.  OAH is a court of limited jurisdiction, meaning that only if a NC statute allows OAH to hear the case is OAH allowed to hear the case.  One facet of OAH’s jurisdiction is adverse determinations by DHHS, its agents, vendors or independent contractors.  Not all states have an administrative court system, and we are lucky to have an accomplished administrative court system.  Our ALJs are well-versed in Medicaid, so, most likely, your issue you bring to OAH will be one already heard by the court.

Another great thing about OAH, is that OAH publishes some opinions.  So you can review some published opinions prior to your hearing.  For the most part, the ALJs are quite consistent in rulings.  For the published opinions of OAH, click here.  And, BTW, if you want to review only cases involving the Department of Health and Human Services, scroll down to the cases with the acronym: DHR.  As you can see, OAH listens to cases involving many different state agencies.

There are, however, some small exceptions. (Remember the knights can jump over your pawns.  So can the Queen).

If the informal administrative appeal process would be inadequate for your remedies then you are not required to exhaust the administrative remedies prior to going to the courts.

An example of inadequacy would be if you are seeking monetary damages and the agency is powerless to grant such relief.

The phrase “monetary damages” means that you are seeking money.  The agency owes you money and you are seeking the money.  Or if you were caused monetary damages because of the agencies actions.  For example, your Medicaid reimbursements were suspended. As a result, you fired staff and closed your doors.  You would want to sue for the money you lost as a result of the reimbursement suspension.  If the agency cannot give money damages or is powerless to give such money damages, then informal agency appeals would be in adequate to address you needs.

Futility refers to situations where an agency “has deliberately placed an impediment in the path of a party” or where agency policies “are so entrenched that it is unlikely that parties will obtain a fair hearing.”

For example, if by appealing informally within the administrative agency, you will not receive a fair hearing because no independent decision maker exists, you can make the argument that the informal appeal process would be futile.

If, however, you exhaust your adminastrative remedies, go to OAH.

Sandhills Center Marketing Closed Providers? Where is the Supervision?

A lady telephoned me today.  We will call her Dannae (because her name actually is Dannae, and she gave me permission to use her name).  Dannae used to have a company, Three-D’s Forever, Inc. d/b/a Step Down Group Home.

Dannae used to manage a group home for mentally ill teens in the Sandhills catchment area.  Sandhills Center is one of our 11 (soon to be 10) MCOs and serves 8 counties: Anson, Harnett, Hoke, Lee, Montgomery, Moore, Randolph and Richmond. The eight county catchment area has a population of approximately 556,000 individuals.

From the time Sandhills Center (Sandhills) went “live” (contract effective date December 1, 2012, and “live” effective date April 1, 2013) until the day her company closed, May 3, 2013, Dannae and Step Down had difficulty dealing with Sandhills.

April 1, 2013, came and went and Step Down still did not have a contract with Sandhills.  She was told by Sandhills that everything had been approved and Step Down was on the list for approval.  Yet, Step Down had consumers in Sandhills catchment area with no Medicaid contract.  Numerous communications went back and forth.

April 24, 2013, Sandhills contacted Step Down saying that it had been approved and a contract would follow.  But still…no signed contract.

Two check periods passed with no Medicaid reimbursements paid to Step Down.

The last contact from Sandhills was April 24, 2013, saying Step Down was approved.

Sadly, Dannae is now unemployed. Prior to May 3, 2013, she contributed to society.  She ran a business.  She helped Medicaid recipients.  Now, because of Sandhills and the bumpy (to say the least) transition to Sandhills, Dannae’s company is nonexistent.

I know. The print is small. But click on the picture and you can enlarge it. See Three D’s Forever, Inc d/b/a Step Down?

Dannae told me that Medicaid recipients/guardians are still calling her for mental health care appointments because of Sandhills list of “current” providers.

Who is supervising Sandhills’ marketing of closed providers? Who is to say that Three D’s Forever, Inc. d/b.a Step Down is the only closed provider on Sandhill’s list?

Who is ensuring that Medicaid recipients have adequate access to mental health care?

Apparently not Sandhills, which, apparently, does not even know that Step Down is out of business.  Surely, not the Department of Health and Human Services (DHHS), because after the MCOs went live, DHHS cannot even track mental health services.  DHHS has no idea who is getting or not getting services.  The providers certainly cannot ensure adequate access.  Once the providers go out of business, the owners are concerned about their own monetary situations (and understandably).

This leaves the Medicaid recipients’ guardians, if applicable, who pull up the Sandhills current Medicaid provider list and start calling around.  They call Step Down only to be told Step Down is closed.

How many other providers on Sandhills’ list are closed? Or no longer accepting Medicaid?

Then how can Sandhills be oblivious to the fact that a provider on its “Current Medicaid…Provider List” is closed?

As for Dannae, whether Sandhills is managing Medicaid behavioral health car within 8 counties adequately enough is a non-issue.  Her company is closed.

She is just another victim of State non-oversight.

McCrory Announces Changes to NC Medicaid: “The Good, The Bad, and the Ugly”

For a full rundown of his comments, please click here.

Gov. McCrory stated that, by 2015, three or four MCOs will be the private entities in charge of Medicaid for NC.  Right now we have 11 MCOs.  Hmmmm…so here we have a huge change….Good? Or Bad? Well, one thing to say for it, it’s a change. Anything has to be better than our current situation, right?  Let’s analyze: 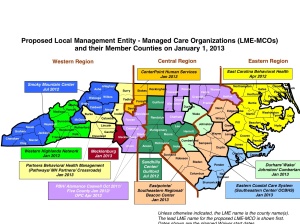 The map above depicts the current MCO jurisdictions. So, in the next year and a half, which MCOs will close?

My guess? The smallest MCOs.

Regardless, what did McCrory propose this morning? And is this a fix?

Good? Bad? Or Ugly?  It depends. Will those 3-4 MCOs act like the current 11 MCOs? Will the Division of Medical Assistance (DMA) be able to supervise these private MCOs? Obviously the answers to those questions determine the answer.

Good? Bad? Or ugly? Good!!!!  YES! YES! YES! What does that mean? That means (from how I understand this proposal) is that if a Medicaid recipient does not want to deal with East Carolina Behavioral Health (ECBH) (I am only using ECBH as an example), then the recipient could choose to use another MCO.  Whereas, currently, the Medicaid recipient is forced to use the MCO that’s jurisdiction covers the county in which the recipient resides.

I must say, statewide MCOs could be a really good thing. If, and only if, (1) the MCOs are supervised (it does not behoove NC to contract with a few MCOs, which end up putting their own profits ahead of the NC Medicaid recipients); (2) (in my humble opinion) the MCOs are not compensated by the amount NOT spent on Medicaid services (there needs to be an incentive to COVER recipients’ services, not to DENY the services); and (3) if there is some sort of consistency among the 3-4 MCOs (we don’t want Medicaid recipients to have to “shop” MCOs to find services; there should be a statewide consistency).

So, was today a step forward in Medicaid reform? I think so. But there are potential dangers that could make today’s reformation (for lack of better words) NOT good.  If we move forward thoughtfully and understanding of possible downfalls, these new changes could result in positive outcomes in North Carolina Medicaid.

One (of many) of my concerns? What happens to the health care providers that go bankrupt because of the MCOs between now and 2015?