Hostile Takeover: Cardinal Usurped by DHHS! Any Possible Relief to Providers for Misconduct?

DHHS has ousted and taken over Cardinal Innovations!

And may I just say – Finally! Thank you, Sec. Cohen.

Cardinal is/was the largest of seven managed care organizations (MCOs) that was given the task to manage Medicaid funds for behavioral health care recipients. These are Medicaid recipients suffering from developmental disabilities, mental health issues, and substance abuse; these are our population’s most needy. These MCOs are given a firehose of Medicaid money; i.e., tax dollars, and were entrusted by the State of North Carolina, each individual taxpayer, Medicaid recipients, and the recipients’ families to maintain an adequate network of health care providers and authorize medically necessary behavioral health care services. Cardinal’s budget was just over $682 million in 2016. Instead, I have witnessed, as a Medicaid and Medicare regulatory compliance litigator, and have legally defended hundreds of health care providers who were unlawfully terminated from the MCOs’ catchment areas, refused a contract with the MCOs, accused of owing overpayments to the MCOs for services that were appropriately rendered. To the point that the provider catchment areas are woefully underrepresented (especially in Minority-owned companies), recipients are not receiving medically necessary services, and the MCOs are denying medically necessary services. The MCOs do so under the guise of their police power. For years, I have been blogging that this police power is overzealous, unsupervised, unchecked, and in violation of legal authority. I have blogged that the MCOs act as the judge, jury, and executioner. I  have also stated that the actions of the MCOs are financially driven. Because when providers are terminated and services are not rendered, money is not spent, at least, on the Medicaid recipients’ services.

But, apparently, the money is spent on executives. This past May, State Auditor Beth Wood wrote a scathing performance audit regarding Cardinal’s lavish spending on CEO pay as well as on expensive Christmas parties and board retreats, charter flights for executives and “questionable” credit card purchases, including alcohol. All of that, her report said, threatened to “erode public trust.” Cardinal’s former CEO Richard Topping made more than $635,000 in salary this year. On Monday (November 21, 2017), DHHS escorted Topping and three other executives out the door. But they did not walk away empty handed. Topping walked away with a $1.7 million severance while three associates left with packages as high as $740,000 – of taxpayer money!

This overspending on salaries and administration is not new. Cardinal has been excessively spending on itself since inception. This has been a long term concern, and I congratulate Sec. Cohen for having the “cojones” to do something about it. (I know. Bad joke. I apologize for the French/Spanish).

In 2011, Cardinal spent millions of dollars constructing its administrative facility.

According to Edifice, the company that built Cardinal Innovations’ grand headquarters, starting in 2011, Cardinal’s building is described as:

“[T[his new three-story, 79,000-square-foot facility is divided into two separate structures joined by a connecting bridge.  The 69,000-square-foot building houses the regional headquarters and includes Class A office space with conference rooms on each floor and a fully equipped corporate board room.  This building also houses a consumer gallery and a staff cafe offering an outdoor dining area on a cantilevered balcony overlooking a landscaped ravine.  The 10,000-square-foot connecting building houses a corporate training center. Computer access flooring is installed throughout the facility and is supported by a large server room to maintain redundancy of information flow.” How much did that cost the Medicaid recipients in Cardinal’s catchment area? Seem appropriate for an agent of the government spending tax money for luxurious office space? Shoot, my legal office is not even that nice. And I don’t get funded by tax dollars!

Then in July 2015, according to the article in the Charlotte Observer, Cardinals paid Ms. Shipman an additional $424,975, as severance. Within one year, Ms. Shipman was paid by Cardinal a whopping $889,975. Almost one million dollars!!!!

Now, finally, DHHS says Cardinal Innovations “acted unlawfully” in giving its ousted CEO $1.7 million in severance, and DHHS took over the Charlotte-based agency. It was a complete oust. One journalist quoted Cardinal as saying, “DHHS officials arrived at Cardinal “unexpectedly and informed the executive leadership team that the department is assuming control of Cardinal’s governance.”” Unexpected they say? Cardinal conducted unexpected audits all the time on their providers. But, the shoe hurts when it’s on the other foot.

The MCOs are charged with the HUGE  fiscal and moral responsibility, on behalf of the taxpayers, to manage North Carolina and federal tax dollars and authorize medically necessary behavioral health care services for Medicaid recipients, our population’s most needy. The MCOs in NC are as follows:

The 1915 (b)(c) Waiver Program was initially implemented at one pilot site in 2005 and evaluated for several years. Two expansion sites were then added in 2012. The State declared it an immediate success and requested and received the authority from CMS to implement the MCO project statewide. Full statewide implementation is expected by July 1, 2013. The MCO project was intended to save money in the Medicaid program. The thought was that if these MCO entities were prepaid on a capitated basis that the MCOs would have the incentive to be fiscally responsible, provide the medically necessary services to those in need, and reduce the dollars spent on prisons and hospitals for mentally ill.

Sadly, as we have seen, fire hoses of tax dollars catalyze greed.

Presumably, in the goal of financial wealth, Cardinal Innovations, and, maybe, expectantly the other MCOs, have sacrificed quality providers being in network and medically necessary services for Medicaid recipients, Cardinal has terminated provider contracts. And for what? Luxurious office space, high salaries, private jets, and a fat savings account.

I remember a former client from over 5 years ago, who owned and ran multiple residential facilities for at-risk, teen-age boys with violent tendencies and who suffered severe mental illness. Without cause, Alliance terminated the client’s Medicaid contract. There were no alternatives for the residents except for the street. We were able to secure a preliminary injunction preventing the termination. But for every one of those stories, there are providers who did not have the money to fight the terminations

Are there legal recourses for health care providers who suffered from Cardinal’s actions?

In light of the State Auditor’s report and DHHS’ actions and public comments that it was usurping Cardinal’s leadership based on “recent unlawful actions, including serious financial mismanagement by the leadership and Board of Directors at Cardinal Innovations,” I believe that the arrows point to yes, with a glaring caveat. It would be a massive and costly undertaking. David and Goliath does not even begin to express the undertaking. At one point, someone told me that Cardinal had $271 million in its bank account. I have no way to corroborate this, but I would not be surprised. In the past, Cardinal has hired private, steeply-priced attorney regardless that its funds are tax dollars. Granted, now DHHS may run things differently, but without question, any legal course of action against any MCO would be epically expensive.

Putting aside the money issue, potential claims could include (Disclaimer: this list is nonexhaustive and based on a cursory investigation for the purpose of my blog. Furthermore, research has not been conducted on possible bars to claims, such as immunity and/or exhaustion of administrative remedies.):

To name a few…

In philosophy, you learn about “evidence of absence.” It’s kind of like a logical assumption based on the LACK of evidence. Such as: P implies Q is false, but Q is false, therefore P is false.  Or Knicole takes a break from blogging on the weekends.  Knicole did not blog today, therefore it must be a weekend.

There is also some who say you cannot prove a negative.  You cannot prove that flying reindeer do not exist; it is up to the flying reindeer to prove they do exist.  Personally, I think this way of thinking is pessimistic and leaves little room for faith.  But, in some circumstances, such as…how are my tax dollars being used for Medicaid recipients, I do not want a non-proven negative.  I want proof.

The point of the article was the drastic decrease in behavioral health service authorizations within MeckLINK’s catchment area (Mecklenburg county) for Medicaid services since MeckLINK went live.

Here is the chart WFAE provided in its article: 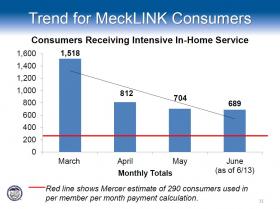 If this graph is correct, MeckLINK has some serious questions to answer to taxpayers. Within 4 months, the number of mental health Medicaid consumers in Mecklenburg county decreased OVER HALF??!!!  From 1,518 to 689!

O’Neil’s answer? The evidence of absence.

O’Neil revealed that MeckLINK is on tenuous financial footing. It ran a deficit in May and June at a rate that would put it out of business in less than a year.  He also argues those deficits are proof that MeckLINK isn’t sacrificing care for profit.

O’Neil argues that MeckLINK’s deficits are proof that MeckLINK is not sacrificing care for profit.  Proof that flying reindeer do not exist!

O’Neil’s contention (that a deficit proves MeckLINK is not sacrificing care for profit) has a gaping, logistic flaw.

I estimated (and probably underestimated) that CenterPoint, by paying for its employees and employees’ families’ health premiums, was spending approximately $1.5 million in health care premiums…money that should have gone to Medicaid recipients.

Well, I found a few graphs published by DMA that caused me more reason to believe that O’Neil’s “proof of a negative” is flawed.

DMA issues reports on the MCOs.  A recent dashboard report cites that, in its “Trends to Watch,”

1. Behavioral health related claims (e.g., Inpt MH, ICF/MR, CAP-MR and non-physician practitioners) continue to decline with the implementation of BH MCOs. Please note that several of the BH-related types of service have volatile costs per service unit and service units per recipient. This is a consequence of the drastic drop in utilization due to the implementation of MCOs and does not reflect a widespread trend. We will likely remove several of these types of service from the report soon.

I have SO many issues with this “trend.”  Such as: “Continue to decline.” “With the implementation of BH (behavioral health) MCOs.”  “Drastic drop in utilization.”  “Due to the implementation of BH MCOS.”  “Not reflect a widespread???”  (Aren’t the MCOs statewide?).  “We will…remove?… several of these services from the report”….WHY? We don’t want to track the fact that the mentally ill are not receiving Medicaid services?

Most years, both last fiscal year and this fiscal year, are fairly similar.

Such as Medicaid physicians’ office visits:

Notice the interplay between the red and blue lines.  The expenditures for physicians’ office visits from last fiscal year to this fiscal year is, relatively, similar. 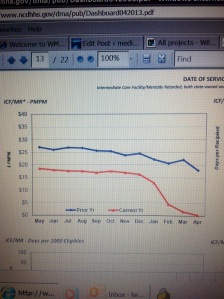 As you can see, the blue line (last fiscal year) shows a semi-constant, horizontal line with a small down tick in April 2012.  The red line, however, (this fiscal year) begins where the blue line left off, but, then, in January-ish 2013, a massive decrease in dollars spent.

So….a massive decrease….surely the MCOs were not paid the same…oh, and surely not more!!!???

Because, remember, if an MCO has a deficit, that means that the MCO is “not sacrificing care for profit.”

Here is DMA’s graph on MCO capitation payments per 1000 eligibles:

Now, mind you, I am no math expert, but this chart, to me, appears to show a 700% plus uptick in MCO capitation payments.

So, according to O’Neil, MeckLINK is running at a deficit, at least for a couple of months.  Yet, DMA’s graphs demonstrate a decrease in mental health services and an increase in payments to MCOs.

Here are proofs of negatives:

The fact that Knicole did not blog today proves that it is a weekend. (Surely, Knicole was not just too busy on a weekday to get out a blog).

MeckLINK’s deficits are proof that MeckLINK is not sacrificing care for profit.  (Surely, MeckLINK did not pay hefty salaries to top executives or all health care premiums for employees and families).

You cannot prove a negative.  But you CAN show proof.