← New Mexico Affords No Due Process Based on a PCG Audit!
The NC Medicaid Mental Health 10-Ring Circus: How 10 Mini-Jurisdictions Will Be the Downfall of Mental Health →

NC General Assembly: Hold Contracted Companies Accountable in NC Medicaid! (If You Do Not, Who Will?)

The legislative branch (General Assembly), most importantly, passes bills (makes the laws) and has broad taxing and spending power.

The executive branch (Governor), most importantly, makes appointments, may veto bills, but those vetoes may be overridden, and executes the spending allowed by the legislature.

The judicial branch (court system), most importantly, interprets the laws passed by the legislature, exercises injunctions and judicial reviews. 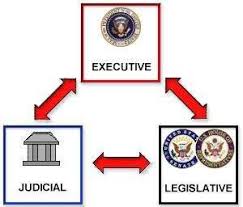 But where is the legislative branch’s checks and balances? If our legislators do not demand accountability, who will?

To see my blog explaining the events in NM leading up to the NM subcommittee meeting, click here.

To see my blog explaining the events in Mecklenburg county leading to the commissioner’s meeting, see all posts on my blog.  Or if you don’t have time to read all posts in my blog over the past 9-10 months, click here.

So why hasn’t the NC General Assembly held a meeting to demand accountability from all MCOs, PCG, and the Department of Health and Human Services (DHHS), Division of Medical Assistance (DMA)?

I do not know.

Because of our government’s system of checks and balances, the legislative branch has the power over the money, both the taxing and spending power.  So the legislative branch has the authority to have DHHS appear before the General Assembly or a subcommittee and demand accountability for the tax dollars spent…as to all DHHS’ contracted companies…and DHHS’ apparent lack of supervision over these contracted companies.

Other legislative entities have done this.

As you can see, the NM subcommittee formed a “U”-shape.  At the table facing the subcommittee, sat:

(2) Me…to be joined later by Thomas Aldrich, manager at PCG.

The above-listed people all testified before the NM behavioral health subcommittee because the subcommittee demanded accountability from HSD, PCG and others due to the disastrous state of mental health in NM.

Why hasn’t the North Carolina legislature demanded the same accountability?

So, when NM providers complained to their State legislators, the NM subcommittee for behavioral health held a meeting to investigate the source of these complaints.

Have not enough providers complained about PCG and the actions of the MCOs to our North Carolina legislature?

I find that hard to believe, but, just in case, providers….CONTACT YOUR STATE SENATOR AND REPRESENTATIVE!

Let our elected officials know that:

There is NOT statewide consistency with the MCOs.

The DMA Clinical Policies and Innovations Waiver are not being applied consistently across the state.  Because of these inconsistencies, the MCOs have created 11 Medicaid jurisdictions. Where is the single state entity?

The MCOs are terminating provider contracts in violation of federal law.

If DHHS is allowing 11 different companies to decide (use its own judgment) as to whether a provider can provide Medicaid services, the MCOs are substituting their decision-making in place of DHHS.

Also, at times, the MCOs are terminating the providers based on erroneous audits from the Carolinas Center of Medical Excellence.  For more on that…click here.

The MCOs are prepaid, risk-based models.  What does that mean? That the MCOs have monetary incentives to DENY services in lieu of cheaper services.  In an extreme case, one MCO has denied 100% of ACTT services (24-hour, 7/days/week mental health care) in lieu of weekly, one-hour sessions of therapy.  Really?  24-hour care…reduced to weekly therapy????  But authorizing weekly therapy instead of 24-hour care saves the MCO thousands, if not hundreds of thousands.

As an aside, the attorney for the MCO stated that the Medicaid recipients should be the ones to appeal these erroneous denials.  To which I say, “Ha!”  One denied recipient suffered auditory and visual hallucinations (birds, snakes and crocodiles attacking.)  Another attacked his mother with a knife after services were denied.  Another was evicted from her home and, subsequently, jailed.  Another believed Satan spoke to him, telling him to kill himself.  I ask, when should the Medicaid recipients have (a) gotten themselves to a computer; (b) googled the NC Office of Administrative Hearings (OAH); (c) found the form to appeal a Medicaid denial of services; (d) filled-out the legal reasons they disagree with the denial of services; (d) complied with OAH procedure and drafted a prehearing statement, conducted any necessary discovery, and created all legal arguments to demonstrate medical necessity; and (e) attended a hearing in front of a judge…before or after hospitalization?  Before or after the recipient has had his/her conversation with Satan?

PCG’s audits are NOT 95% accurate (not even close).

I’ve heard that PCG’s contract with DHHS places an obligation on PCG that its audits be 95% accurate.  One person questioned whether that was 95% accurate as to PCG must be able to recoup (defend upon appeal) 95% of the audit results.  Obviously, that is not the case, because the inverse is probably closer to true.  95% of PCG’s audits are overturned (obviously, this number is not accurate…I am making a point).  Another person wondered whether the 95% accuracy meant that if 1 PCG auditor comes up with a $1 million overpayment, and the next day another PCG auditor audits the same documentation, that the 2nd auditor would be within 95% accurate of the $1 million the 1st auditor deemed needed to be recouped.  If the latter is the case, I can see why PCG may have 95% accuracy.  If you teach all your staff how to audit a Medicaid provider and all staff are taught to audit incorrectly, then, no matter the staff member auditing, the audit will be incorrect…but consistent.

Regardless, for a multitude of reasons, I have found almost all PCG audits erroneous.

Yet, these PCG audits are terrifying Medicaid providers, causing them to ramp up attorney fees to defend themselves, and, in some cases, putting providers out of business.  And, in all cases, increasing the provider’s administrative burden and decreasing the time a provider can allot to serving the Medicaid recipients.

Just to help out, here is a link to all NC State Senators’ telephone numbers.

← New Mexico Affords No Due Process Based on a PCG Audit!
The NC Medicaid Mental Health 10-Ring Circus: How 10 Mini-Jurisdictions Will Be the Downfall of Mental Health →